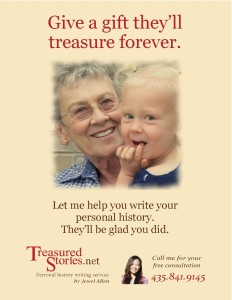 To spread the word about Treasured Stories, I decided to design posters featuring a grandparent and their grandchild, as well as a little gem of a treasured story. MyrLene Stevens and her granddaughter Allyssa immediately came to mind. MyrLene is always happy and smiling. And Allyssa is such a joy.

My 16-year-old daughter Sierra, who has taken photography/yearbook the past couple of years and has won numerous awards (including Best of Show one year at the State Fair), took their photos. Sierra asked how long I expected the photo shoot to last. I guessed, “Probably as long as Allyssa’s attention span.”

It was an overcast evening, but the lighting was actually great. Sierra didn’t need to use the flash and just took photo after photo of the adorable pair, until, as we predicted, Allyssa was done. No worries, we had a great selection. In fact, it was hard to pick just one photo.

Thank you, MyrLene and Allyssa!

My grandmother & mother were from Australia. I worked two jobs for two years after high school so I could take my grandma to Australia. Why? Because she left a son in Australia.World War II had just broken out, and the son, Norrie, had to go join the army.

We stayed for a year with grandma’s sister. Stan (my husband) was a missionary there; we met at church. He said to himself, “When I get off my mission, I’m going to Salt Lake City and look up that girl.” At the train station, before he was transferred, he told me, “Would you mind writing to me and letting me know how the Saints are doing in Perth?” I came home in November, he got back in March, and then we were married in July.