I’d already arranged to have a photo shoot for a Treasured Stories poster with Kathy Mouritsen and “one or two grandkids” this past week, when she called.

“Jewel,” she said, her voice tinged with despair. “I don’t think I can do it.”

“Just pick one or two grandkids.”

We laughed. I told her we’ll do several versions. She could bring down however many grandkids wanted to participate.

Anyone who’s had a teen attend Grantsville High School in the last decade knows that Kathy Mouritsen, who retired a couple years ago from teaching English, is synonymous with appreciating books. My oldest daughter had the pleasure of taking her classes. Kathy has a gift of making others feel that what they have to say and write is important.

That’s why I asked her to model with her grandchildren for this poster. Kathy is one of those happy and serene people whom you just love being around. Plus, she and her husband Dick have a beautiful family.

At photo shoot time, on a fall day in her yard, and the rain nicely stopping for us, five grandchildren showed up. One hadn’t planned on it, but when a sibling went in to Grandma’s house, he decided he wanted in on the fun. The plan was to have grandma read books to them. She had brought out a mountain of books on her loveseat from which each child picked a favorite.

First, I took a group picture. 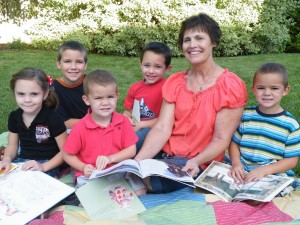 Doesn’t she have a beautiful family?

Okay, so I’d never met these kids before. My challenge was to break the ice and get a cute smile out of each of them for separate posters. Easy peasy, right?

Wally went first. He wasn’t too sure about having his picture taken, but I coaxed a cute smile out of him. 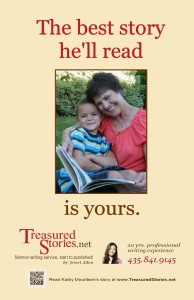 Ethan came next. We chatted for a bit while I took pictures, but it wasn’t until he saw his dad jumping on the trampoline – something Dad didn’t do very often – that he really broke out into a smile. 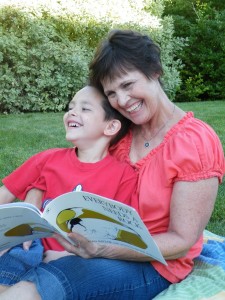 This was the final poster. 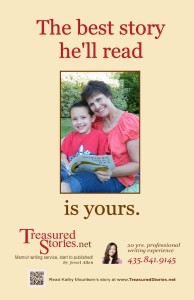 Richard, who goes by the nickname Richie, was amazingly patient, for being the youngest in the bunch. As I predicted, he had one of the sweetest poses. After photos, we invited him to go play with his cousins. “But Grandma didn’t read the book to me!” he said, his face crumpling into near-tears. After assuring him that grandma will read to him later, his face cleared up. 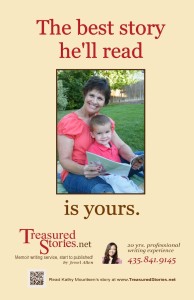 Next came Emma. I chatted her up and got this charming pose. 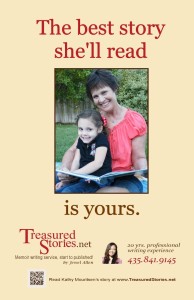 Last but not the least was Zach. We decided maybe Grandma didn’t have to carry him on her lap, so instead, we got this. 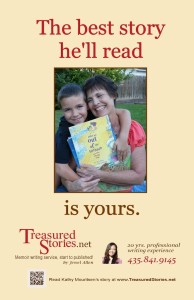 So there you have it. Five posters in all and boy am I glad I don’t have to pick “just one.” I could see why Kathy had such a dilemma.

The posters will be going up in town next week. I’ve often told my husband that the posters are so fun to make I could do them all day, but of course I have memoirs to do, too. Which is equally rewarding. Thank you Kathy! And thanks to all her grandkids who came!

***
Wow, if you’re still with me on this long post, good for you! Here’s Kathy’s treasured story:

I didn’t read a lot growing up because I was mostly active, playing outdoors. Back then, we had the elementary school in our backyard. We played on swings and I started to play softball at nine. I remember just playing, playing, playing. I feel like I have smiled and giggled most of my life. I think that’s just how I came. We had a happy childhood.

I loved the book “Mrs. Mike.” As a teacher, I bought it for my shelf . It’s about a lady who lived in Alaska somewhere remote. It just really impressed me.

I’m a bit embarrassed to admit: English wasn’t one of my favorite subjects. I didn’t love to write. It was because I was kind of shy. When you write, you have to put yourself out there to write. But I was really good at grammar and reading. And I was way into history.

When I went to college, there were a lot of teachers. Women weren’t very common as teachers. It was either to be a teacher or a secretary. My dad was a college football coach and P.E. professor. “Kathy,” he said, “you can’t get a history degree because you can’t get a job. Only coaches get hired.”

My highest score on my ACT was in English. So I went into English at BYU. But it was tough for me. All that writing. I had a teacher who was an old maid and all we read was depressing. I didn’t see what she wanted me to see. I had a C+. But I made it through.

When my oldest was 15, I taught for five years at the middle school, then 13 at the high school. I never had a lot of confidence as a teacher but I loved to teach. I loved the children.

Thing I loved about teaching, you recognize the things that are so beautiful, and you see the talent. You want to motivate young people and bring that out, help them see what they have. And see what’s possible.

I remember one student whose mother was an educator and wanted to steer him into a certain way of writing. I said, “You have your own style. Develop it.” I think the mom may have resented me being so easygoing. But later, I read his letters from his mission; they were beautiful. The mom recognized then that his writing talent was there all along.

Another student went into drama. He had such a unique perspective. He didn’t write typically and that is so much fun. You think of the great writers that know conventions, but they choose to do things differently. That’s one of the things that make them great.

I celebrated non-conformity in writing: how you see it, instead of how someone else wants you to write it. Some people have this view of life and the world and they’re able to put it down in words. That’s the fun part of teaching.

I was watching my very first grandchildren one day. I had the book, “Everyone needs a rock.” We sat down and all three read it. Afterwards, we spent the afternoon at South Willow looking for their special rock. It was a sweet moment, developing that relationship with them.

Many of my grandchildren love to sing and they love this songbook. They just sing these silly songs, especially Ethan and Emma.

If you can write, it will enhance your life forever and the lives of those around you. Being able to share your story, and have others read it and know you because of that – it’s a powerful thing.

Thank you Kathy! At Treasured Stories, we can help you put all your stories into a beautiful book so you can share it with your loved ones. Contact us HERE for a free, no-obligation consultation.